Are you ready to learn some cool facts?

What is your favorite type of bird?

With your parent/caretaker’s permission you can click on the links below to see Cuckoo birds and Cuckoo clocks.

6. A group of cuckoo birds are called an asylum of cuckoos or a family of cuckoos.

7. Cuckoo birds are migratory birds. They migrate/fly to warmer areas during the cold season.

8. The Cuckoo bird makes a sound like coo-coo, coo-coo just like the sound from a cuckoo clock!

Share a cool fact about Cuckoo birds with us? 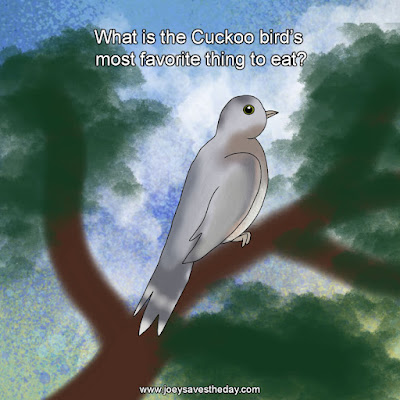 1. The Cuckoo Bird by Judy Corbalis

2. The Cuckoo Bird by Carol Krueger

3. The Cuckoos (Bird Families of the World) by Robert B. Payne

4. Cuckoos of the World by Johannes Erritzoe

Thank you for reading my post!! “Just one small positive thought in the morning can change your whole day.”-Dalai Lama

Hi!! I'm Mimi, the author of the JOEY SAVES THE DAY! book series. I love reading and writing. I homeschool my two youngest children. My 15-year-old daughter illustrated the books and will illustrate all the rest of them in the series. She started illustrating the series when she was 14 years old. She loves to draw. She is learning as she goes. Her dream is to one day be a famous illustrator and a fantasy book writer. All five of the books are available on Amazon, Barnes and Noble, Target, Walmart, and Books A Million. Children and adults everywhere will love these books. The story and illustrations within the pages of the books will put a big smile on your face and your child will be delighted as you read them the books. The illustrations are adorable and the story is super cute. You don’t want to miss out on the opportunity to own this collection of adorable books!

at September 06, 2022
Email ThisBlogThis!Share to TwitterShare to FacebookShare to Pinterest