Hi everyone! Who is ready to learn some cool facts about Arizona??

1. A few things Arizona is known for are the Grand Canyon and the Hoover Dam. The nickname for the state of Arizona is: The Grand Canyon State. The Arizona state motto is Ditat Deus which means GOD Enriches. The abbreviation for Arizona is AZ.

3. The Arizona state bird is the Cactus Wren. The Cactus Wren is brown in coloring and has a whitish or tannish chest with black speckles.

5. The Arizona state flag became the official flag in 1917. The Arizona state flag features a copper star that stands for the copper production in Arizona. The red and yellow stripes (rays) at the top of the flag stand for the original 13 colonies of the United States and it also stands for Arizona’s beautiful sunsets and landscapes. The blue on the bottom of the flag is for freedom and possibly the great Colorado river which carved out the Grand Canyon.

6. Some crops that are grown in Arizona are: cabbage, carrots, onions, lettuce, cotton, hay, and potatoes.

8. Tarantulas and Rattlesnakes live in Arizona. They are very dangerous and should only be handled by professionals. Some of the other animals that live in Arizona are: Black Bears, Coyotes, Deer, Javelina, Ringtail cat, and Skunk. Never go near wild animals. 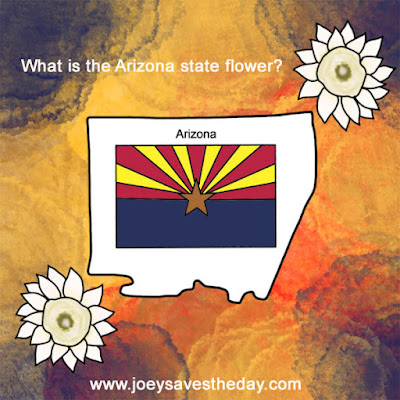 at March 24, 2022
Email ThisBlogThis!Share to TwitterShare to FacebookShare to Pinterest