lots of learning and fun!

Did you know that Indiana was the 19th state to join the union? Yes, that is certainly correct! Indiana officially joined the union on December 11, 1816! Indiana is located in the Northeast Midwestern region of the United States. Indiana is bordered by four (4) states: Illinois, Kentucky, Ohio, and Michigan. Lake Michigan borders Indiana on the Northwest upper side of the state. Indiana is the thirty-eighth (38th) largest state in the United States. Indiana is a big state. There are about 6,805,985 people living in Indiana. Michael Jackson was born in Gary, Indiana.

When did the state you live in join the union?

5. Indiana’s state flag was officially adopted on May 11, 1917. The flag was designed by Paul Hadley. Paul Hadley lived in Mooresville, Indiana. The gold/yellow torch on the flag stands for liberty and enlightenment. The 13 gold stars that form a circle around the torch represent the original 13 colonies. The additional five gold stars refer to the 14th through the 18th states that joined the union. The biggest gold star right above the torch on the flag represents Indiana which was the 19th state to join the union. How many gold stars are there in total on the flag?

6. Some crops that are grown in Indiana are: corn, hay, potatoes soy bean, tomatoes, and wheat.

8. Some of the animals that live in Indiana are: beavers, black bears, chipmunks, little brown bats, southern flying squirrels, and white-footed mice. 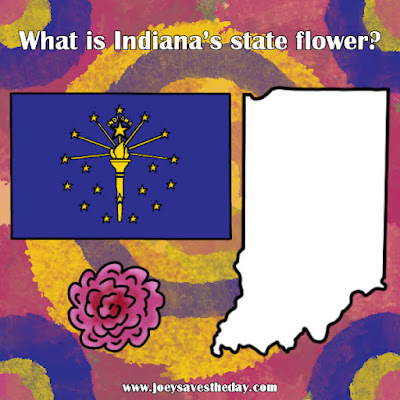 3. H is for Hoosier: An Indiana Alphabet by Bruce Langton

4. I Love You as Big as Indiana Board book by Rose Rossner

Tune in next week to learn some cool fun facts about Iowa! Thank you for reading my post!! "Don't have a good day; have a GREAT day!" -Free Guy the movie.

at June 09, 2022
Email ThisBlogThis!Share to TwitterShare to FacebookShare to Pinterest