Share a fact about a famous person that lives in your state?

1. A few things Missouri is known for are: The Pony Express, farm land, and the Lewis and Clark Expedition. A few of the nicknames for the state of Missouri are: the Show Me State, the Ozark State, and the Mother of The West. The Missouri state motto is Salus populi suprema lex esto. The motto is a Latin phrase which means, “The welfare of the people is the supreme law”. The Missouri state motto was adopted on January 22, 1822. The abbreviation for Missouri is MO.

6. Some crops that are grown in Missouri are: corn, cotton, oats, rice, soy beans, and wheat.

7. Some cool places to visit while in Missouri are: the Ha Ha Tonka Castle Ruins located in Camdenton, MO., the Saint Louis Zoo, and the Wilson's Creek National Battlefield. 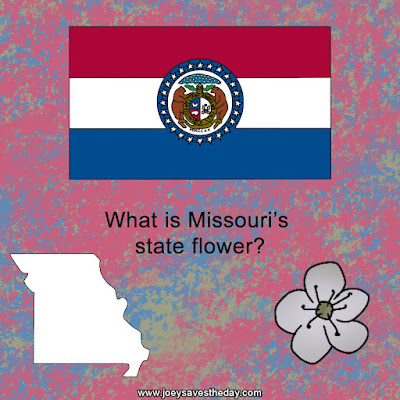 3. My First Book About Missouri! by Carole Marsh

Tune in next week to learn some really cool facts about Montana! Thank you for reading my post!! “Just one small positive thought in the morning can change your whole day.”-Dalai Lama

Hi!! I'm Mimi, the author of the JOEY SAVES THE DAY! book series. I love reading and writing. I homeschool my two youngest children. My 15-year-old daughter illustrated the books and will illustrate all the rest of them in the series. She started illustrating the series when she was 14 years old. She loves to draw. She is learning as she goes. Her dream is to one day be a famous illustrator and a fantasy book writer. All five of the books are available on Amazon, Barnes and Noble, Target, Walmart, and Books A Million. Children and adults everywhere will love these books. The story and illustrations within the pages of the books will put a big smile on your face and your child will be delighted as you read them the books. The illustrations are adorable and the story is super cute. You don’t want to miss out on the opportunity to own this collection of adorable books!

at August 25, 2022
Email ThisBlogThis!Share to TwitterShare to FacebookShare to Pinterest