Are you ready to learn about Utah?

Have you ever been to Utah before? Maybe you were born there? Whatever it may be, you can learn facts about Utah right here; just continue reading. Joey and Jinger love learning cool facts about each of the different states in the United States. They would like me to share some of those facts with you! Every Thursday, I will be posting cool facts about each of the fifty states in the United States. The states will be done in alphabetical (ABC) order! Last week we posted facts about Texas. This week we are posting facts about Utah. The countdown is on, only six (6) more states to post about! That means there is only six more weeks to go… Yippie!!

Did you know that Utah was the forty-fifth (45th) state to join the union? Yep, that is correct! Utah officially joined the union on January 4, 1896! Utah is located in the Western region of the United States. Utah shares a border with five (5) states: Wyoming, Colorado, Arizona, Nevada, and Idaho. Utah also shares a corner of their state with New Mexico. Three other states all meet in that same area. Utah, Colorado, New Mexico, and Arizona make up the four corner states. All four states touch in that one corner (quadripoint). You can stand in all four of those states at the same time. Utah is the thirteenth (13th) largest state in the United States. That means Utah is one of the bigger states in the United States of America. There are about 3,380,799 people that reside in the state of Utah.

Did you know that the population of the United States is estimated to be about 334,240,213 people?

Share a fact about the state you live in?

1. A few things Utah is known for are: beautiful landscapes/rock formations, the Sundance Film Festival, and skiing resorts. A few of the nicknames for the state of Utah are: the Beehive State, the Mormon State, and Salt Lake State. The Utah state motto is “Industry”. The Utah state motto was adopted sometime in March 1959. The abbreviation for Utah is UT.

Remember to ask your parent/caretaker’s permission before clicking on any links!

6. Some crops that are grown in Utah are: barley, corn, hay, oats, pumpkins, and rye.

7. Some cool places to visit while in Utah are: Canyonlands National Park, Thanksgiving Point, and the Sundance Resort.

8. Some animals that live in Utah are: beavers, bison, coyote, elk, mountain lions, and roadrunners. 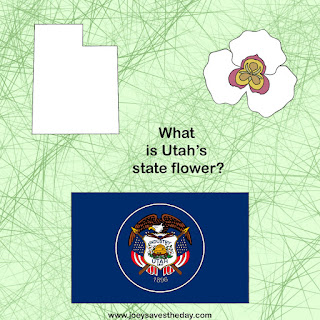 3. U Is for Utah by Christopher Robbins

4. A Is For Arches by Becky Hall

Tune in next week to learn some facts about Vermont! Thank you for taking the time to learn some cool facts by reading my blog post!! If you find a mistake, please let me know. "Wisdom is not a product of schooling but of the lifelong attempt to acquire it." — Albert Einstein

I have made a variety of printables, check them out here:

Join the Joey Saves The Day group on Facebook for giveaways, learning, and fun:

I'm Mimi, the author of the JOEY SAVES THE DAY! book series and other titles. I love reading, drawing, and writing. I homeschool my two youngest children. My 16-year-old daughter illustrated the books and will illustrate all the rest of them in the series. She started illustrating the series when she was 14 years old. She loves to draw. She is learning as she goes. Her dream is to one day be a famous illustrator and a fantasy book writer. Help me make my daughter’s dreams a reality! Children and adults everywhere will love these books. The story and illustrations within the pages of the books will put a big smile on your face and your child will be delighted as you read them the books. The illustrations are adorable and the stories are super cute. You don’t want to miss out on the opportunity to own this collection of adorable books! All five of the books are available on Amazon, Barnes and Noble, Target, Walmart, and Books A Million.

at January 19, 2023
Email ThisBlogThis!Share to TwitterShare to FacebookShare to Pinterest