Happy Weird and Wacky Wednesday to you!

May your day be filled with lots of learning new and exciting stuff!!

It is pretty weird that a reindeer has a nose that shines bright red and can light up the night sky while guiding Santa's sleigh on Christmas Eve. Joey wants to know if you knew that Rudolph the red-nosed reindeer first appeared in 1939 in a booklet for a Chicago area Montgomery Ward? Yep, that is right!! Montgomery Ward asked one of their copywriters who at the time happened to be Robert L. May; to write a story they could hand out to their customers during the holiday season. That is where Rudolph started on his journey to the cute fun Rudolph we know and love today.

Who is your favorite reindeer?

Facts about Rudolph and his creator:

3. Sometime around 1947 the CEO of Montgomery Ward gave Robert L. May the rights to his book he wrote for them. Also, in 1947 Maxton Publishers published Robert L. May’s Rudolph the Red-Nosed Reindeer Poem book just in time for the holiday season!

4. Robert May’s brother-in-law was a song writer. His name was Johnny Marks. Robert May asked his brother-in-law to write a song about Rudolph and he did. Gene Autry sang Rudolph the Red-Nosed reindeer and it became number one on the charts during the week of Christmas in 1949.

6. On Sunday December 6, 1964 the animated movie of Rudolph the Red-Nosed Reindeer aired on NBC for the first time. It has been airing for 57 years this year (2021).

7. On November 6, 2014 Rudolph was honored by the United States Postal Service. They issued four stamps that featured characters from the 1964 animated Rudolph the Red-Nosed Reindeer movie.

Can you share a fact about Rudolph the Red-Nosed Reindeer with us?

Books about Rudolph the Red-Nosed Reindeer:

1. Rudolph the Red-Nosed Reindeer by Robert L. May 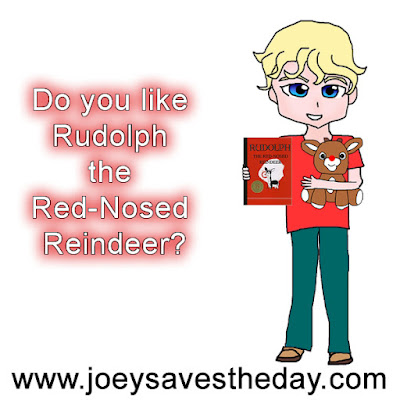 at December 08, 2021
Email ThisBlogThis!Share to TwitterShare to FacebookShare to Pinterest