May you learn some cool stuff today!

5. Kentucky’s state flag was officially adopted on March 26, 1918. The flag was designed by Jesse Cox Burgess. Jesse Cox Burgess was an art teacher that lived in Kentucky. Kentucky’s state flag has dark blue background. The state seal of Kentucky appears on the blue background. Inside the white circle there are two men shaking hands and the words UNITED WE STAND DIVIDED WE FALL appear above and below the two men. The Goldenrod flower appears below the seal. The words COMMON WEALTH OF KENTUCKY appear above the seal.

6. Some crops that are grown in Kentucky are: corn, oats, soy bean, tobacco, and wheat. 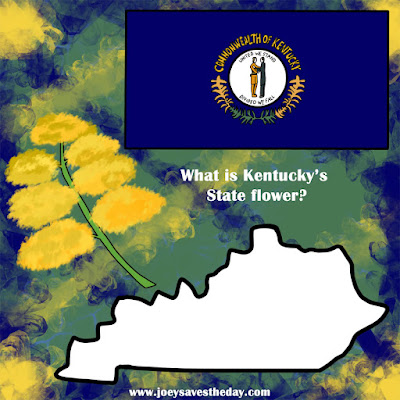 1. B Is For Bluegrass: A Kentucky Alphabet by Mary Ann McCabe Riehle

2. I Love You as Big as Kentucky by Rose Rossner

3. D is for Derby: A Kentucky Derby Alphabet by Helen L. Wilbur

Tune in next week to learn some really cool facts about Louisiana! Thank you for reading my post!! Don’t forget that "One small positive thought can change your whole day."-Zig Ziglar

at June 30, 2022
Email ThisBlogThis!Share to TwitterShare to FacebookShare to Pinterest